...it must be a Goat Island Skiff!

And so, after a year and a half of construction I can proudly say I am the owner, builder, sailor, captain of a Michael Storer designed GIS: 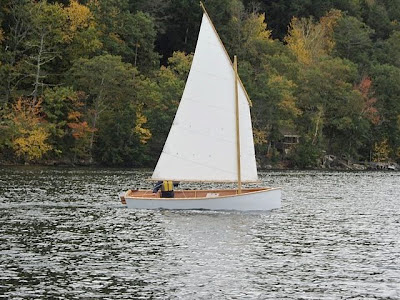 She is not yet named as this outing was only a "sea trial" so-to-speak.  There are still many details that must be completed before I can call her finished.  And there was some damage suffered a week prior to this momentous occasion that I'll post separately on.  Once I spend the time this winter knocking out the last 10-15%, I'll formally introduce her to Neptune with all the pomp and ceremony I can force others to endure.  Only then will her name be revealed to you mere mortals.  So don't ask.

The float test occurred during a busy weekend at the family cabin when the menfolk tend to the fleet for the winter.  As a result, we had only enough time to splash her, tow her into the windiest part of the lake, confirm that she has no leaks and that all functional systems function systematically.  Then it was back on the trailer for the haul home.  But in all honesty, it was a glorious day and I was on cloud nine...

So, what remains to be completed?  All bright wood needs varnish to protect the epoxy sealant.  Tiller extension is absolutely critical as I could never position myself forward properly.  Hiking straps, although the mounting hardware is installed.  Oarlocks and oars (which are under construction and are about 50%).  Revised mounting for the cleats securing the halyard and the downhaul.  Repair of the damage in the foreword buoyancy tank.  Anti-skid treatment on the sole (aka the floor).  Reinforcement patches for the reef points on the sail.  Private signal pigstick ("ok, now he's just making shit up...").  And that's not including the conversion to a Yawl which is also part of the plan.

I will post more about the construction that progressed during my blog boycott and I will certainly chronicle the official launch and whatever watery misadventures I may find myself in.  Stay tuned!


[Editorial note: this post is being written and published LONG after the actual splashing but I've adjusted the date to match the event.  I may or may not "back-date" future construction posts; I haven't decided yet]
Posted by davlafont at 12:00 No comments: